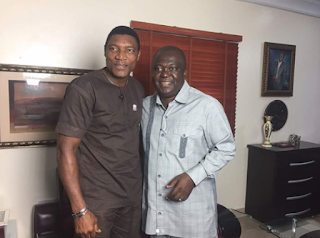 Rufai was a member of Nigeria’s 1994 and 1998 world cup squads where the Super Eagles qualified for the round of 16.

Rufai has now joined former Super Eagles’ left back, Ifeanyi Udeze who also teamed up with the Brila FM crew to give listeners fresh and informed football analysis just in time for the world cup.

The Brila Sports Media Group launched Africa’s premier sports radio station (88.9 Brila Fm) October 1, 2002 and has since undergone series of expansion. The station broadcasts to the world via http://www.brila.net.

Title : Dodomayana emerges Brila FMâ€™s transfer deadline signing
Description : Rufai was a member of Nigeria’s 1994 and 1998 world cup squads where the Super Eagles qualified for the round of 16. The Tunisia 1994 Afri...
Rating : 5
Related Posts: Entertainment, News