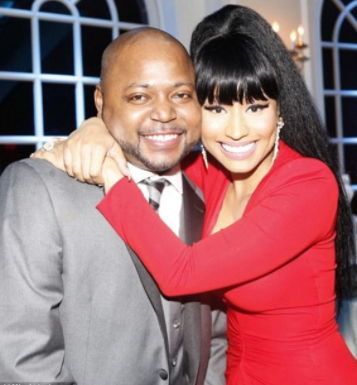 Nicki Minaj's brother, Jelani Maraj, who was convicted of repeatedly raping his 11-year-old stepdaughter, was brutally beaten by inmates inside the Nassau County Jail and it was livestreamed.

The attack was reportedly orchestrated by a group of inmates who "hate child molesters" and are known to target prisoners who molest or rape children. In the video livestreamed by inmates for the world to see, Maraj is seen getting punched repeatedly by fellow inmates as he tried unsuccessfully to fight them off.

In November, Maraj was found guilty of predatory sexual assault against a child and endangering the welfare of a child and faces a minimum of 15 years and a maximum of 25 years behind bars.

During his trial, the 11-year-old brother of the victim alleged that he saw Maraj down on his knees with his sister's pants around her ankles. He immediately ran away from the basement, but Maraj later came to find him and slapped him 10 times in the face before threatening the young boy’s mother in an effort to keep his mouth shut. The boy was 8 at the time. Maraj's DNA was found on a pair of the girl's pajamas but he vehemently denied raping the girl.

Since he's been in jail, his famous sister has been supportive, She visited him in December along with their mother.