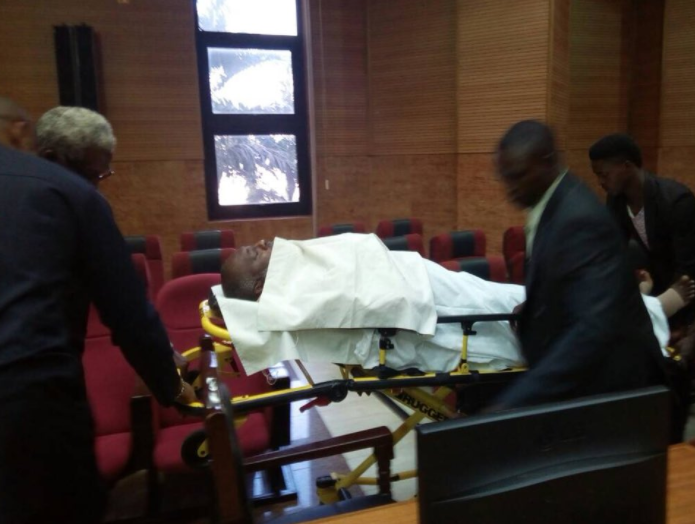 Today, former spokesperson of the Peoples Democratic Party, Olisa Metuh, arrived the Federal High Court, Abuja, venue of his ongoing corruption trial on a stretcher after being taken down from an ambulance.

Metuh’s lawyer at the last adjourned date, informed the court presided by Justice Okon Abang that his client was at the Nnamdi Azikiwe specialist hospital for treatment on spinal cord complications but the judge insisted on seeing him in court today.

Somehow, many Nigerians on social media aren't buying the 'drama' as its being described!

PHOTONEWS: Former @OfficialPDPNig Spokesperson, Olisa Metuh’s stage-managed appearance during his N400m trial at the Federal High Court In Abuja today. Mr. Metuh has been working quietly with Chief Medical Directors of UNTH and Nnamdi Azikiwe University to make it a reality pic.twitter.com/fQhkVVr1kq

Olisa Metuh arrives court in ambulance after Justice Okon Abang had insisted that he must be in court today despite report from hospital.

The other time, it was Diezani Allison-Madueke Cancer story and picture.

You people should kuku join NollywoodÃ°ÂŸÂ˜Â‚Ã°ÂŸÂ˜Â‚

Olisa Metuh arrived court today in an ambulance and was stretched into the court. Olisa Metuh looted N400m.

Meanwhile, Babachir Lawal and other Buharist looters are walking free without facing the court of law.

Let's not deceive ourselves, Buhari is not fighting corruption.

DRAMA: Former @OfficialPDPNig Spokesperson Olisa Metuh arranges to attend his trial on a stretcher with the help of medical directors of Nnamdi Azikiwe specialist hospital. The gimmick worked as Mr. Metuh got a long adjournment pic.twitter.com/XWiWB0LDDA

Olisa Metuh went to court on a stretcher. Hope Nollywood is watching and learning, not those yeye films they do.

Medical reports to allow you travel abroad. In extreme cases, see Olisa Metuh in today's news. No way you'd be packaged as a dying man without the help of competent but crooked doctors. https://t.co/hTSr2JH9EX

Olisa Metuh is a bastard sha. That was pure theatrics. A note from his medical practitioner stating his medical condition would suffice. I hope the judge rebukes him and his lawyer.

I have said repeatedly that people like Olisa Metuh, FFK and others who got campaigns funds did nothing wrong. They are just been persecuted for criticizing Buhari and it’s the FACT.

If you want to prosecute anyone, go and arrest Goodluck Jonathan and also put Dasuki on trial.

What happened to Olisa Metuh?
Barely 2 months ago, he was agile and strong enough to fight security men at the PDP National Convention! What ailment made him bedridden an in Intensive Care Unit of a hospital! pic.twitter.com/Fjgb8jKlUO

Olisa Metuh arrived in court via an ambulance and was carried in by a stretcher... This back and forth is getting more interesting pic.twitter.com/d9SzdoPrvJ

When he was stealing, he did it in full state of health and fitness. Now that it is time to answer for his crime, Olisa Metuh came to the court on a stretcher just to attract public sympathy. Well, get well son, Mr. Metuh, so that you will fully answer for your crimes.